It appears that nearly 70% of Americans on unemployment are earning more than they did in their pre-laid-off jobs. Some as much as 150% more. What does this mean for recruiting and the economic recovery? 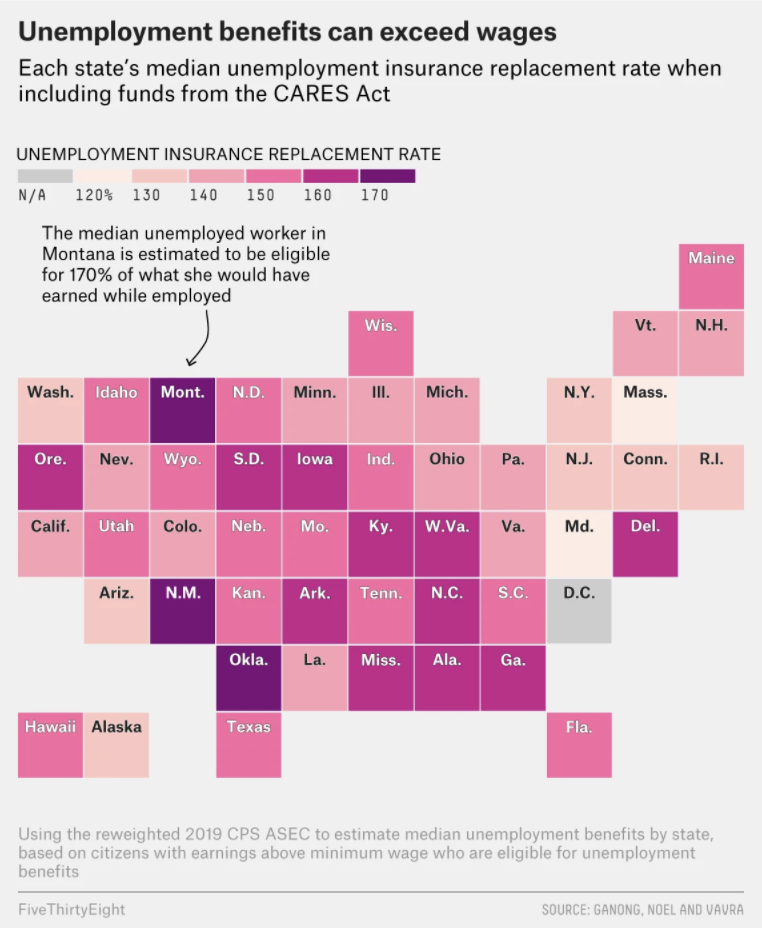 Making recruiting entry-level workers even harder than it has been in the past, many people are finding their unemployment benefits outstripping the amounts of money they would have earned had they not been let go.

This graphic, from the venerable 538, shows the distribution of benefits as a function of replacing the worker’s income, state by state in the United States.

They cite a report from University of Chicago economists which “estimate that 68 percent of unemployed workers who can receive benefits are eligible for payments that are greater than their lost earnings.”

What does this mean for Workers?

I believe there are three factors at play here which can be good and bad for things in the short run, but will end up as major factors in the long term.

The winners in these struggles remain to be seen, but history has a few lessons of its own to share:

First, I believe we are at the tip of a once-a-century shift in massive economic change. In fifty or seventy years, b-school textbooks will talk about the 2010’s like the last few years before refrigerators took over the ice box business in 1930s America. Those lectures will undoubtedly relate similar harbingers in our time of how none of the significant and profitable ice-trade businesses which boomed in the late 1800s ever made it as a significant player in any sense past 1950.

What does this mean for us? Booming industries that were safe havens for workers and owners alike just months ago may be gone in the next 5-10 years and, except perhaps for

Someone Has To Pay The Bill

The massive, crippling consumer debt problem is going to continue to cause issues in unexpected ways in the next few years.

Smart individuals will work hard right now to find ways to pay off debt and remove unneeded expenses. These short-term benefits in unemployment are intended to be a bridge over troubled waters, not a platform to build on. Mind you, the gravy train will come to the end of the line. Will you be clinging to the freight car when that happens hoping to eek out one more spoonful of gruel, or will you have taken your fair share and moved on to better things leveraging the economic boost for what it was intended for — to keep you from selling plasma to pay your rent — and instead contributing meaningfully to this new post-COVID-world of ours.

End of the day, someone has to pay these bills. Of course, those payments have to come from the backs (and pockets) of taxpayers. If the economic times turn around quickly as some hope, we may see a way to narrowly escape truly challenging times. However, even as it’s predicted these job losses will be felt far into 2021 and beyond, it stands to reason that, like grabbing the store credit card on your way out so you can save 10% on those jeans, as convenient as this all is, the whole world will be economically paying this down for a long, long time.

Recruiting & Retention is going to be harder for entry-level roles

Companies who value their entry-level workers will need to find ways, monetarily or otherwise, to compensate these workers and intent them to work rather than stay home, collect unemployment and “look for work” while golfing, watching NASCAR, etc.

Furthermore, I predict retention will be a killer subject not to far from now, as companies eek out some life, and things seem to have some semblance of settling down, I believe that people who were lucky enough to survive the unemployment cuts in the first place will pack their bags in droves as they realize, with some disdain, that all those glittery perks at their former companies was not, in fact, gold at all when it came down to what really matters to them in their lives.